Salt sprinkled on a steak causes dark red spots to appear after a few minutes.

Health Canada has produced a number of interactive tools for helping people to understand nutrition labeling and serving size.

How often does the serving size listed on the label correspond to the amount you eat? For example, I’m more of a 2-3 cup of cereal eater. Then again, children might eat only 1 cup.

How could I have missed this blog? This needs to go on a blogroll or something around here.

I can’t say that I know much about US food policy, but this commentary by Joseph Stiglitz shines a light on things south of the border. The farm bill used to be a benefit to the farmers in the past by helping them during difficult times and was one of the ways more food (and more affordable food) was made available to the American public. But now, the farm bill has morphed into a way for large food corporations to pay farmers less for their product – letting the taxpayer subsidize the farmers’ income while the food corporations make higher margins on the processed food. Then on the consumer side of things, funding for food stamps is decreasing for the next several years. The consumer and farmer are getting screwed while the food corporations are making all of the gains. What inequity.

A related film that I recently had the chance to watch is A Place at the Table, which highlights that many people in the US face hunger on a daily basis, even if it seems like they have a stable job and income. It’s a sad state of affairs. Synopsis (via Wikipedia):

As of 2012, about 50 million Americans were food insecure. This was approximately 1 in 6 of the overall population, with the proportion of children facing food insecurity even higher at about 1 in 4. One in every two children receive federal food assistance. The film sees directors Kristi Jacobson and Lori Silverbush examine the issue of hunger in America, largely through the stories of three people suffering from food insecurity:

If you can find the film, it’s worth watching.

Update: 2014-08-29: I’ve tried to make these noodles 2 more times with  my recipe below, and found the results to be inconsistent, with varying degrees of yellow-ness, chewiness and alkaline-smellyness (yes, it’s a thing), so i’m not so sure about this recipe anymore. I think it has to do with the bottles of lye i’m using and possibly different pH levels in the solutions.  Feel free to try the recipe and experiment to see if it works for you. And let me know if it does or doesn’t, and what you tried.

So I had this grand notion to make ramen noodles. I love ramen, and I doubt that I would ever have the time to make the full pork broth that the noodles are served in, but at least I could try making the noodles, right?

It started off with me reading about miso noodles* several months ago and trying to roll out some noodles by hand –  it’s a bit of work, but rewarding nonetheless. The noodles were delicious, coated in a brown butter sauce. I would do it again even if I didn’t have a pasta roller handy, but the pasta roller makes it so simple. Especially since it doesn’t really require any cleaning, besides dusting it off after use.

So a few weeks ago I received, as a gift from my lovely partner, a pasta roller. And a few weeks before that, I had purchased some Buenas brand lye water for the purpose of making ramen noodles.

Lye water is an alkaline solution that when added to high protein flour acts to make the gluten more chewy – well, not actually chewy but having more bite. It also gives the noodles a more silky texture, and makes the noodle hold together better in the soup – it doesn’t disintegrate unless it’s been in the soup for a long time.

I used the widely read recipe from norecipes.com and had to do some tests, considering that the alkaline solution I was using was of a different brand.

That recipe, using the Buenas lye water, was not enough to even turn the colour of the noodles. I was hoping for a yellow dough, but this was all I got:

After adding first 1 teaspoon, 2 teaspoons, 4, 8, etc, I realized that not even that many teaspoons was enough to make the noodles turn yellow. I ended with trial #7 by adding a half cup of of the lye water and a teaspoon of water. The dough is wrapped and left to rest for at least an hour before rolling and cutting. With all of the prep for each of the trials, #1 had rested for maybe two hours before I got to rolling and cutting it. 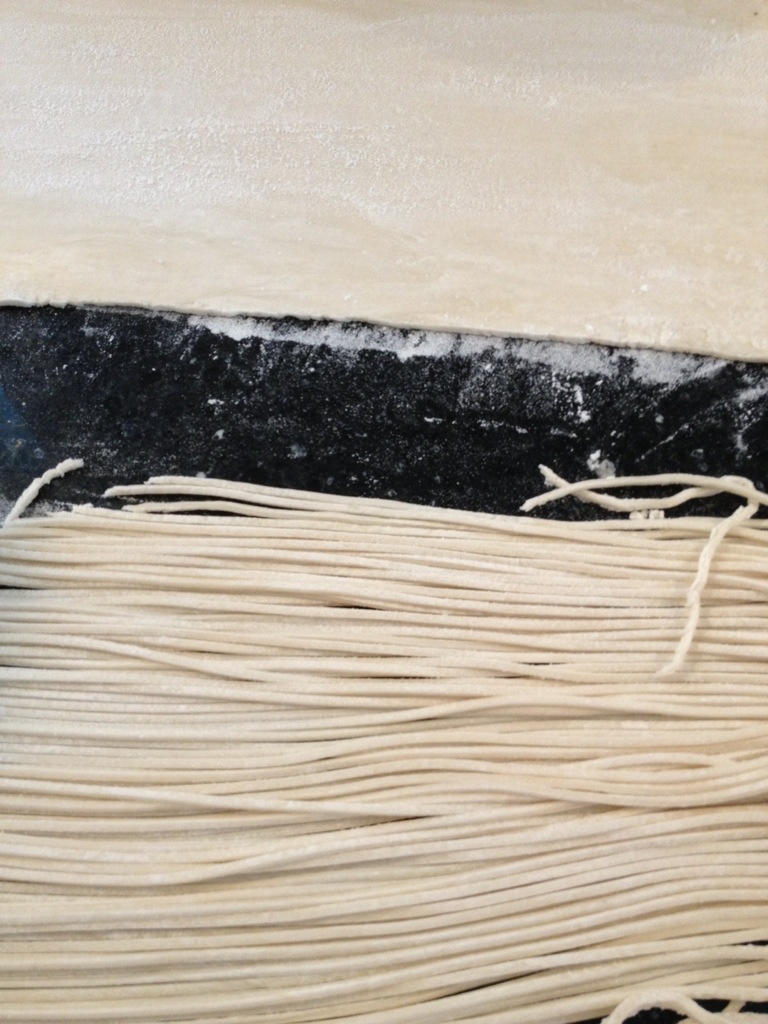 After all of the rolling and cutting of the dough, I boiled up some water and boiled samples of each trial batch for 2 minutes. (Ideally I’d have used 7 different pots of boiling water, but I think even that’s going too far for me.) With the taste testing done, it turned out that trial #7 with the most usage of lye water was the best noodle, with perfect chewiness and slipperyness to the noodle. The recipe is below:

* The book Ideas in Food is a great resource on why different cooking methods work for different applications, with practical recipes that elucidate those methods.

** I just so happened to find and purchase a bottle of the Koon Chun brand of lye water. Initial testing of the norecipes.com homemade ramen noodle recipe has not worked for me and I think a LOT more of the Koon Chun solution is required than is given in that recipe. I’ll update when I get to making more of the noodles and figuring out the optimal ratio of water to alkaline solution.